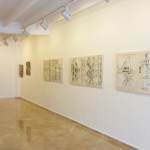 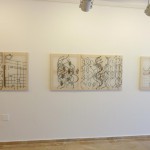 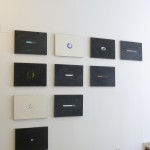 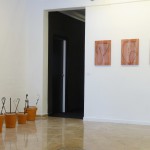 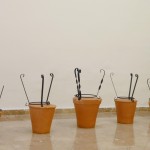 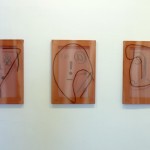 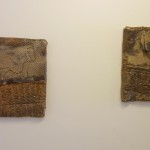 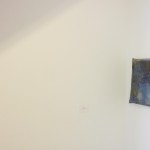 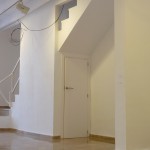 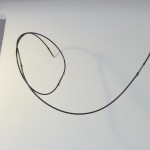 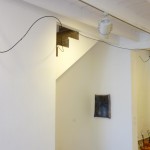 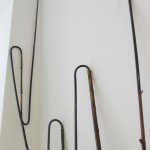 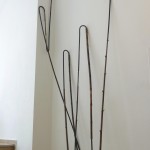 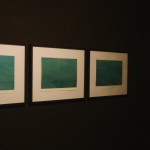 Estructura Espacial Original, (Vea Usted, aquí estaba…), takes as its point of departure a text by the Jesuit French historian Michel de Certeau, the title of which has become a slogan for speaking of place, and of invisible and visible identities. In “Andar en la ciudad”, Michel de Certeau offers us an interpretation of the act of walking as an act of speech.
Estructura Espacial Original, (Vea usted, aquí estaba…), by MP&MP Rosado is an exhibition project that explores the concept of the sign, understood as an obstacle, mark or signifier, and the occupation of space in sculptural practice. The process of spatial perception registers the passing to the other, to practice space is, instead, to be other and to go to the other, what is shown signals what is no longer. Casual meetings and personal negotiations come together in the process of investigation, without the other but in a necessary relationship with the disappeared.

The exhibition includes ready-mades of PVC foscurit curtains, a complete series of clay pieces with different symbols, Loadings, different kinds of pots with feet and a wooden cane.

The exhibition has 6 pieces:

One that represents the passage of time. Me siento bien aqui.

One that collects and preserves footprints. Indicios.

One that shows the subject through the experience; al tomar ser tomados. Invisibles de lo visible.

On that multiplies the boundaries of the object. Prácticas de espacio: Figuras de estilo.

It is through the curtains of our apartment exposed to the sun for four years, as we present the central piece of the project. Me siento bien aqui, curtains created with lead from different types of enclosures, symbolising defence, limits and protection as the current critical vision. Curtains and ceramics represent an encounter between the exterior and the interior, between the private and public, these pieces rearrange the space and its content by affecting the perception and circulation of the spectators through it. The passage of time, subtracting and adding…

Indicios creates a record of images “modelled” from footprints, imprints and familiar signs, collected, found, recollected, explored or “scanned” in the city. We are certainly witnessing a double process: he collected paintings in which experimentation with sculptures can be seen,  and another even more central than their own creative process and that resides in the spectator: to interpret and make sense of these pictorial images and sculptural fragments that converse amongst themselves.

The space and marks communicate the domain. Vea Usted, aqui estaba, represents a reference to its absence, the footprint as a symbol of a hidden or invisible reality. In this series outlines of daily objects are printed into clay, each piece accompanying a text with a relationship to the printed elements, thus the words complete the vacuum, restoring that which has disappeared, and restoring the status of the signifier in the image.
In Loading, memories are fragmentary and concealed stories, stories

are fragmentary and retracted, stories waiting and remain in a state of hieroglyphics. The Loading screens that we find ourselves at when the pages of the internet load remind us of the difficulty of representing everyday reality; they become abstract geometric paintings that show a collection of different symbols and colours. This exercise reflects the difficulty of translating that which is behind each image, the impossibility of converting experiences into images. The transformation or literal splitting of space and objects breaks the relation of the observer to the world, returning to the essence or biography of things to find different possibilities within space.

Invisibles de lo visible, explores the biography of objects, the states of things that are only stored away, layers that only deliver authentic values once the interior has been very carefully explored, according to Walter Benjamin. The series is composed of clay pots, metal supports and glazed ceramic balloons made by hand.
In Prácticas de espacio: Figuras de estilo, we make us of the cane as a symbol of the possibilities and prohibitions that compose space. In this way, and like Michel de Certeau points out, Charlie Chaplin multiplied the possibilities of his cane, making other things from the same thing and exceeding the limits that determine them set by the objects use. So with the cane you can go here, but not there, can create a shortcut or detour and is forbidden from following paths considered mandatory. We exhibit a series of sculptures and objects developed from a wooden cane, as a physical representation that interferes with the limits of the object itself. The exhibition combines sculpture- clay, paper and tissue- with drawing and painting.
The exhibition project will propose a critical approach to questions or themes such as the footprint, the interior or the exterior. In order to develop a collective work on the proposed theme, from different participatory and associative evidence, it produces or generates ideas, thinking in terms of built projects or sculptural speech. The principle objective of the exhibition is to demonstrate the reasoning around sculptural practice in contemporary art linking it to its “participatory” perception in social space, reflection, analysis and development of artistic production, to generate thought about its impact on the social, political and economic context of the city, reflecting on the material aspect and the historical aspect, focussing on the development of the creative process rather than the outcome.