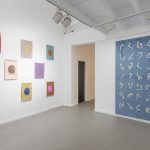 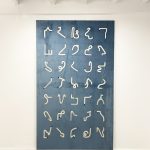 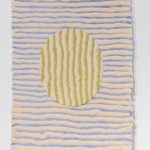 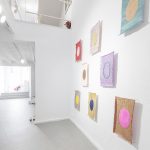 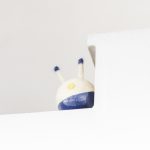 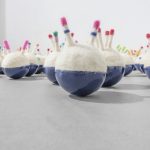 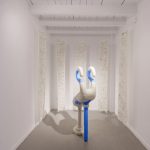 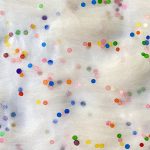 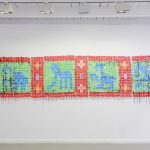 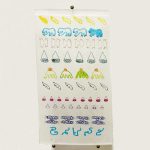 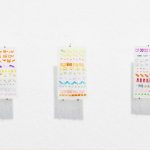 The exhibition titled “Me lo dijo Hisham” harmonizes the recent investigations that Irene Infantes has carried out during her residency at C3A in Cordoba, which encompass the artist´s practice since the beginning of her career.

Trained in Textile Design at Central Saint Martin´s in London, Irene Infantes (Seville, 1989) doesn´t distinguish between art and design; her practice approaches both fields in parallel. Nonetheless, she combines art production with collaborative projects for design firms, one of which being Christopher Farr. In both respects, the artist explores the plasticity of materials; she uses tension and resistance and applies them to execute work characterized by a synthesis of representations and varied repertoire of materials, textures and surfaces. Her work aims to evoke unease to the spectator, from the point of view of interpretation, and seduce them thanks to the materiality, color, and compositional clarity of the work.

The artist´s habitual exploration of resources, materials and techniques, that are embedded in industrial design and crafts, are what characterize this production. On this occasion, they have been applied for a detailed study of a textile piece from the Caliphate era: an early 10th century turban that belonged to Hisham II. This sumptuary piece is a prime example of the wealth and quality of the cloth industry during the Caliphate of Cordoba; the end point of the trade routes that united the East and West during the Middle Ages.

The piece mentioned is currently being preserved at the Royal Academy of History in Madrid. It was discovered at the end of the 20th century in a small church in the province of Soria. Following its investigation, it has been associated to workshops held in Cordoba that were attributed to its proprietor, the ruler Hisham II. The turban presents an interesting and complex ornamental repertoire where, on a frieze of medallions, one can witness: birds, cuadrupeds, eight-pointed stars and even anthropomorphic representations. This band of figurative motifs is framed by two bars: stylized Kufic inscriptions of texts from the Coran and praises to the Caliph.

The fascination of Irene Infantes following the investigation of this textile has led to the works gathered in this exhibition. The artist´s interest does not only lie in the ornament or iconography of the fabric, but also in the questioning of the relationship of this garment with its owner, Hisham II. The piece is associated with an almaizar- a type of headdress whose ends descended in front of the shoulders of the ruler, to whom the garment was strictly reserved for.  Given the scope of this textile (more than a meter long) and the materials implemented (silk, upholstery and gold thread embroidery), wearing this garment must have been of tremendous discomfort for the young Caliph. Irene has projected into her imagination how the owner could relate to such a heavy attribute of power and wealth. She wonders how to understand the bearer through the many references and symbols that the piece contains. Each of the exhibition pieces showcases a friendly and naive interpretation of the ornament represented in the garment; a version more akin to the young age of its owner (Hisham II began his caliphate at the age of 10).

In her practice, Infantes has taken the elements that the headdress encompasses and has stripped them down to their own unique essence. She has communicated these to the different pieces that the exhibition gathers.  By doing this, the Kufic texts with initials ending in half palmettes are transformed into simple curved and counter-curved lines, which are arranged like an alphabet in order to be easily identified. The cuadrupeds, an earthly reference, are simplified to the point where they form vertical bands terminating as waves; the eight-pointed stars, a tribute to the eight hills of paradise, are synthesized in conic geometry; correlative curved forms evoke the wings of birds and reference their two conditions, the earthly and the heavenly.

The show brings together sculptural works of diverse formats, realized on a base of textiles and polychrome polymer ceramics. They are an entire repertoire of two-dimensional pieces, which include cotton, wool or plastic. Infantes´ experimental pieces, made from wool or cotton, draw inspiration from the first prehistoric textiles. Just like felt material, it is a form of support that has not been spun or woven. Irene Infantes´ processes tempt the limits of materials. She subjects them to mechanical pressure of 200 C and applies silk-screen inks and needle felting onto them. For her first exhibition at Alarcón Criado, the artist will be presenting, for the first time, a series of works realized from pressed foam rubber fragments that have been assembled through lacework. The result are semi-transparent pieces which appear fragile or brittle, but in reality, are solid, of strong visibility, and delicate at the same time.

The exhibition proposes a new attire for Hisham II. An attire that respects original themes and symbolisms, adapts to the vision of a child and aims to awaken one´s curiosity and interest in the elements that were associated with this owner´s position and responsibility. It therefore silences any reference to politics, power or religious nature and proceeds to penetrate a field where imagination, creativity and joy dominate.