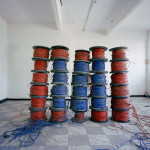 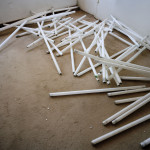 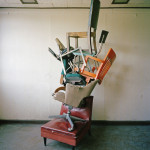 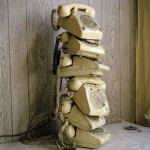 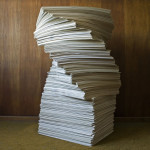 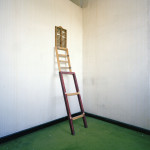 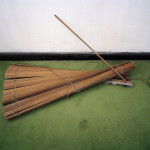 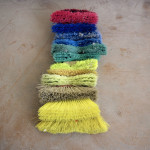 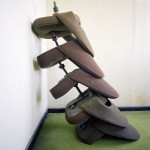 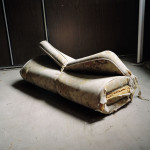 Juarez #56 is a project based on the site of an abandoned building in Mexico City that is scheduled for demolition. project is an attempt to record pieces of history that are simultaneously being erased and created, and investigates the dialectic between destruction and construction (the destruction of a site and construction of an image, but also the destruction of the site and the new construction that will replace it). It reflects a city that is growing and changing every day, struggling to reconcile past and future histories. In the process, new buildings grow old very fast and old buildings are left abandoned, modern ruins replace old ones and stand as empty monuments of progress. Laviada wants to capture this ‘in-between’ stage of things; that fleeting moment when the past and present collide and what once was, now fades away in its ruins.

She received a BFA at the Rhode Island School of Design in Providence, Rhode Island and subsequently completed her MFA at the School ofVisual Arts in New York City. Her work examines the processes of construction-destruction in the center of Mexico City. Working in abandoned buildings, she stages interventions working with the traces that their last occupants left behind. Using the ordinary objects she finds in these spaces, she constructs ephemeral installation-sculptures that she photographs on location, creating an improvised studio. Alejandra leads us to modify our perception of reality, with the result that objects lacking in conceptual or formal entity serve to relate object (memory of the place), sculpture (the transformation of these elements into the mere disposition of themselves) and image (that is the final visual basis which remains through the medium of photography). Partly between installation, sculpture and contemporary photography, Re-Constructions (2011), compared to past series like Photo-Sculptures (2008), presents a shift of direction in which the objects appear to us with stronger evidence of accumulative principles, or De-Constructions (2009), in which the artist’s interventions in the place were an eroding agent, adding to the chain of the deconstruction of certain buildings. In her last project, Geometry of Space (2014), explores the intersection between painting, photography and sculpture using the photography’s potential to construct an image that would not exist in reality.

Her editorial work has been published in the New York Times Magazine, Wallpaper, Capricious and Amercian Photo. In 2011, her photography belonging to the series Deconstructions was the title page of the Culture of the World in a sepcial edition for ARCO. Her work had also been included in important publications as Art Photography Now (Second Edition) Susan Bright; Abstracción Temporal, Museo Experimental El Eco 2010; or Contemporary Art Mexico. Thames and Hudson.