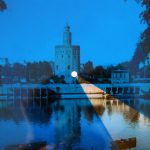 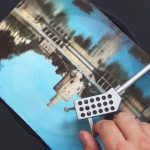 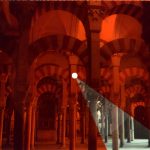 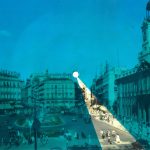 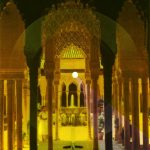 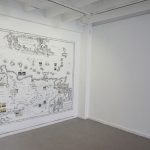 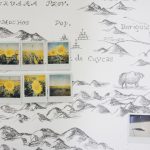 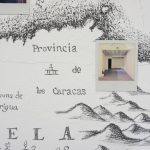 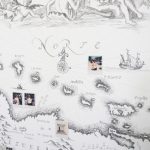 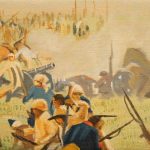 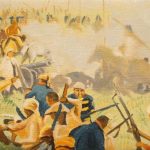 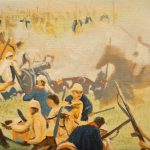 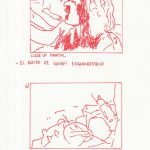 Iván Cando (Caracas, 1983) shows an obvious interest in the mobility of images, around concepts and genealogies that derive from film and sound recordings. He meditates around representation as a device for historical and political construction. A question that deals with the juxtaposition of various media such as video, painting, photography, drawing and sound.

‘Film and sound recordings are more or less hypnotic devices that simulate technical continuity whilst actually affecting perceptual discontinuity. For the Venelzuelan artist Iván Candeo (Caracas, 1983) the history builds on that illusion of mobility, a process that develops between jumps and transitions, leaving inaudible or invisible areas. Exploring the moments that compose a sequence of actions, cinematics and melody bring to the fore-front the precariousness of the narrative apparatus and its profound poetics.

This premise acquires specific connotations in the exhibition NOVÆ ANDALUSIÆ. Observante inestable, a solo show from Candeo in the gallery Alarcón Criado in Seville, which refers – among other things – to an imprecise geography, from unstable topography, located on the edges of faded maps and displaced places of confusion. The proposal refers to different contexts and histories, related through similar problems. One of the works that integrates the project is Mapa de Venezuela y de la provincia de Nueva Andalucía (2019), an on-site drawing of a seventeenth century map on the gallery wall intervened with polaroid photographs, recalling the past and present frictions of a complex geopolitical state, that places many – including the artist – between the ‘here and the ‘there’. “I realized – that all these works have the distance, spatial or temporal displacement as a protagonist of creative attitudes, that make me interested in accounts of the historical past, old cartographic representations, audible postcards and a migration of images from one medium to another.”

The first “framing” contains diverse territories, a mobile focus, oscillating, the pendulum swinging between various vectors: historical representation, the transmediality of the image (cinema, painting, drawing), viral information (news, social networks), between other situations in contemporary culture. In each case, the editing mechanisms give rise to apparent narratives that are based on the temporal and physical fragmentary character of events. Film frames, sounds, subtitles and notations constitute units of appearance defined by correlations and intervals, both in art and in life.

In NOVÆ ANDALUSIÆ. Observante inestable. Cinematic, graphic, photographic and sonic representations coexist, all detached from the spatial and temporal inscriptions from which their statements were created. In Postales Sonoras (2018-2019) listening is sabotaged by the “tap” of the rotating image. In the series Storyboards (2019) subsequent drawings replace the previous recording of unforeseen events. In the work Taita Boves (2014) the frames constitute 1 second of film that acquire a spatial concretion, and in the video Jericó-Jericó (2015-2018) you see a motion picture film, but not the projected image. In general, the elements are dislocated or presented in a partial way, foreshadowing a wrong externality from which the infrastructure of the medium is perceived.

Each of the works presented directs our attention to specific areas of narrative discourse and its effects on history; rhetorical contraptions based on facts whose connection, causality and outcome is not “substantial” but teleological . When the mechanism is displayed, certain folds appear and certainties are diluted.

And what remains, the vertiginous spectacle of the multiple stories that happen simultaneously. The uncontrolled outbreak of the call of breakingnews that circulates daily in newsreels and social networks, constituting in accounts without an author, without a cause and without sense.’