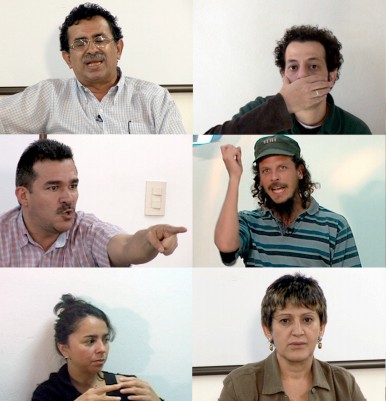 Severa Vigilancia is a nod to the title of a little-known play by French author Jean Genet. The project arises from a happening at the University of Antioquia, Medellín, in 1999. That year had witnessed much violence on campus, with three people being murdered in the same semester. During a seminar of the Master’s degree program in theatre, two students who had to give a presentation on the life and work of Jean Genet decided to stage a hoax of an armed kidnapping of some fellow students. For this purpose, they wrote a detailed script designed to produce a crescendo of terror, finely tuned to reach peaks of anxiety that probably would not have been attainable in the unfolding of a real event. ‘Why would you risk having me, of all people, do a presentation on Genet?’ asks the author of the hoax, under the alias of ‘Joche’.

He asks this rhetorical question without mocking the faces of terror he saw on his fellow students. ‘Joche’ is no different from Genet: he signals the moment when he feels his resemblance to the French author, ‘A scoundrel instilling fear’ he says smiling. The underworld of Genet’s youth is the same as the one ‘Joche’ has witnessed in Medellin; Genet is alive in the Medellin of the 90s in the same way as Dostoyevsky lives on in the characters of Kurosawa (Qu’est-ce que l’acte de création?, Trafic 27, Gilles Deleuze, 1998). Just as Genet is not easily dismissed as an amoral, savage anarchist, so ‘Joche’ must be understood as a man with a mission. On the one hand, he sets out to break the codes of theatrical representation, and on the other to rebel against the status quo of an apathetic academic world that is unable to experience the horror that is taking place outside the walls of the classroom, a few meters away, in a city that is bleeding from mindless violence. The piece embodies many layers of violence: from the violence that is, to the violence that is not, and to the violence that could have been. It also points towards the undecidability between violence and the representation of violence. It remains suspended forever within a fiction – and its double.