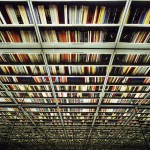 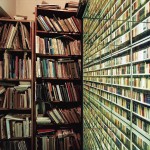 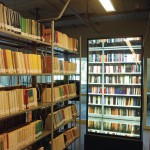 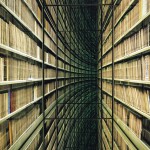 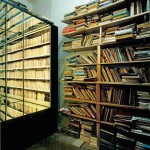 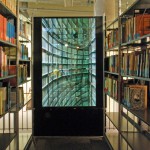 The Library project is not the representation of a specific library, but rather an attempt at representing the very essence of the idea of a library. It is loosely inspired by Jorge Luis Borges’ novel The Library of Babel, where the author describes the universe as an “infinite and cyclic” library. The project is thus an attempt at showing, through a photographic installation, the library as an infinite gathering of books, but that can be contained in a single book.

If one assumes that a library has three main functions, that is to gather books, to stock them and archive them, and to make them available to the public, it is possible to phrase the following statements. First, as a library is, by nature, a place where books are gathered, it is potentially infinite, because books, and thus knowledge, knows no boundaries and is constantly expanding. And second, a library may contain a book on libraries, or even the list of all books in that particular library, which means that a library is simultaneously the container and the content of the same subject matter

The Library is a photographic installation developed upon the above-mentioned propositions. In its simplest form, the installation is composed of six elements (photographic objects and installations) laid down in a circle. These elements are the following:

In this setting, watching the installation is like a backward tracking, starting from a book, where each additional step backward places the viewer in a higher position, and ending where it has started.