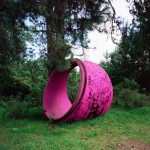 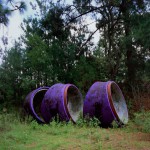 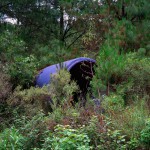 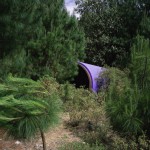 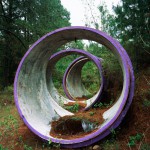 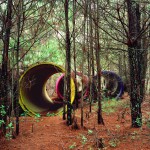 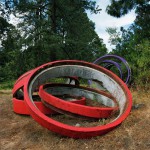 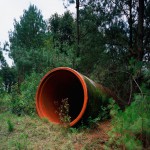 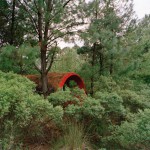 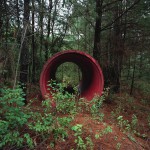 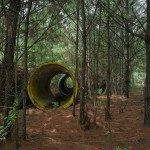 For this project, I started to inspect about fifteen concrete cylinders that I found in the forest and that were part of the Cuitzamala system that brought water to Mexico City. A very small section of this system was left incomplete, and these cylinders, about 2.5 meters in height, were abandoned in the forest about thirty years ago. I was painting some of them in order to photograph them afterwards. Upon painting the cylinders various colors, people started to notice them and in a way they became momentary, semi-permanent sculptures. However, I never obtained permission to paint them, and it was a complicated project considering that on more than one occasion guards came and I had to run from the area.

It is important to mention that I began this project in January 2012, a few weeks before the death of Ricardo Legorreta, who was one of Mexico’s most important architects and in addition to being my mentor I was very close with him. His work and his ideas have always influenced me, but of his architectural legacy, one of the most important elements is color. I know many of his works well, and I decided to try to only use colors that appear in his architecture (such as pink, purple, yellow, red, and blue). The paint that I used is the same as that which is used to paint houses and buildings, and it was interesting to discover that a color exists that shares his name: Rosa Legorreta. I used this color for the first photograph of the series, Homenaje a Legorreta [Homage to Legorreta].

The first part of the project has concluded, but it is my intention to visit this site periodically during the coming months and years in order to document how these structures are changed with time, if the continue to deteriorate or maybe they will be taken over by someone else (graffiti). I still do not have a way of knowing what will come of this, but I believe that there will be interesting parallels with other public sculptural works that through the years end up being abandoned.