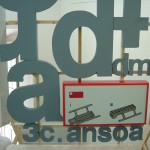 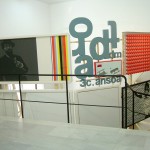 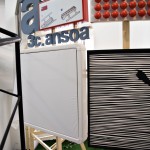 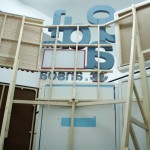 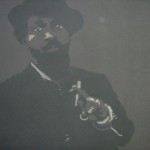 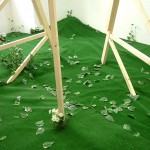 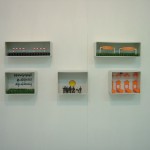 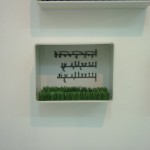 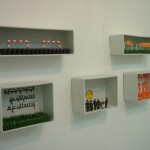 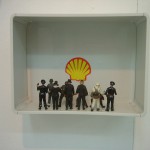 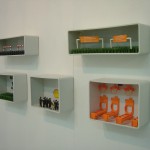 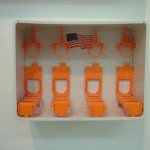 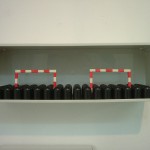 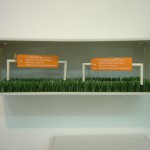 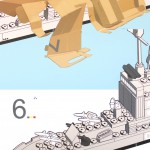 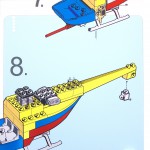 Recent work by Martín Freire is grouped in the exhibition, “Theme Park”, a conscientious
emergence in which the artist proposes us to enter a broader terrain of artistic field –
wondering the perimeters established by this mysterious pastiche pretending to conquer new
fields of performance.
“Speak to Start Your ‘Painting’”. A quoted painting because it has incorporated a number of
resources provided without traditional painting materials. In previous work, Martín Freire had
already predicted this trend through his preference to work with spray paint, using the stencil
technique (negative templates that were combined in the hands of the artist in many ways). In
more recent works such as “Snow Brothers” – work awarded an honourable mention in a
regarded competition, 2007 – incorporates vinyl and tape, with a drawing composed of thick
inks and alcohol when required. The difficulty of giving plastic aesthetic value as a kitsch
material proves to be a relentless practice: superimposing translucent tape creates different
gradations, or using vinyl with different shades of the same colour to create the effect of light
and shadow. For the artist who absolves traditional painting materials, it is a pre-tense to
express the artificial. However, from a formal point of view, it happens to be a conscientious
exercise of technical refinement in which the author no longer relies on resources such as the
paintbrush, pigment or binder to create a painting. The areas in which we are presented with
this style of work are seen in plates of white methacrylate – its shine and polish coexist with
interventions of the artist without raising a rupture between form, and strengthen the voluntary
departure from what we usually call paint. Only the hand of the artist dealing with such
materials – the cool tricks with which solves the work and its justification by the topics covered –
make us rediscover tremendous dedication and freshness. References to Pop are inescapable
in the work. However, not by making icons legendary, but by selecting these symbols in their
immediate area, resulting in a new generation of emblems – perfectly recognisable, that most
often arise from associating two multitudinous ideas: football and religion (the image of the
Sacred Heart of Jesus T-shirt “Juventus”); toy and war (the creation of a war ship armed with
missiles, following the precise instructions of the toy “patent”, but adapting it to the average
scale of an adult); successful ‘hybridisation’s’, which masterfully blend the banal and the
transcendent resulting in very representative images of our present.
“Theme Park”, as a cornerstone, includes a complex installation that shows a new pairing:
painting and advertising. The world also reflects this idea (which is not a contemporary
concept) of consumption; those spontaneous accumulations of useless elements that
propagate especially in the outskirts of cities. The materials used by the artist for such a facility
could well be taken from those unsightly spots, although the artist’s work goes further to
idealise this environment – receptive to such materials as long as they appear at their highest
nobility; refined, classified, and suitable for entry into an aseptic museum.
The work is inspired by morphological billboards which can be found near roads. There are
several fences with different orientations – some of which are shown to us in the process of
change – as if they were about to replace the advertising claim (perhaps a reference to the
working process), and they are presented back to the viewer, who is moved to surround them
in search of the ad. When we accept the invitation found in several panels, three of them work
as pictorial pieces themselves. There are three worlds, almost randomly chosen; three different
ways of dealing with plastic; resulting in three ads that match fortuitously at the end of a road.
In all three panels the artist exercised the same effort to break out of the materials and
resources of painting. Reemergence in vinyl (the player with the head of Daffy Duck), new goals
(recreation, hypertrophied and minimalist of a board, or of a “patent” where the surface is
added to construct a new toy – a destructive weapon, or representation in a masterly light;
simplification of a mysterious character who seems to invite us to do something, and that is
helping to support the felt and the use of pigment spray). This artist presents a critique of the
idea of personal style, purposing as an author who prefers to delve into the inexhaustible
expressive possibilities offered by the everyday. Thus, making impossible any typecasting
beyond that maintained formal through purification – that pop, nee-generational, has a thematic
versatility in which plastic can expand its endeavours. Works that require the art to ease its
already expanded field can only provide justification for their own existence.