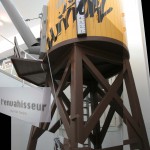 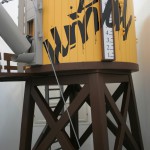 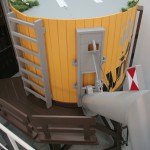 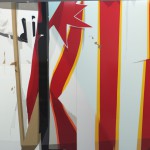 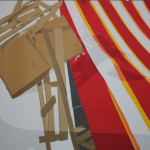 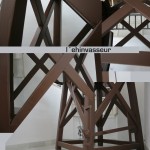 The idea of Martin Freire is an open dialogue between the pictorial and sculptural. The title of the exhibition alludes to a resolute intention to occupy the spatial volume of the gallery, constricting the air that the works demand in order to suggest the idea of invasion-occupation.

The installation approaches a work of sculpture (Freíre specialized in sculpture at the school of Fine Art in Seville). In it a circular structure, a kind of deposit, is combined with what could be a heliport that serves as the container lid. This work proposes a perplexing play of scales: too big to be a toy, too small to be real. It is also a game of interpretations which may arise around what it contains and in what quantity, and around its function. This circular vessel is supported by a cross-shaped structure proposing a reflection around the relation that traditionally exists between the pedestal and the work. In this case the base (support) and the work (vessel) that forms an indivisible but delimited whole. It also has certain constructivist and monumental connotations due to the elevation that the structure gives to the circular vessel.

A two-dimensional work will be located in front of this three-dimensional work realized using a characteristic technique of its author: vinyl and adhesive tape around methacrylates. It will be a piece of 400 x 160 cm in which the artist plays with proposals related to the concept of expanded painting since it will connect the interventions on the wall of the gallery with the floor installations. This work will allude to the world of the circus, a prolific universe in the art world for its connotations with the spectacular, risk, fun and nomads that from modernity have surrounded two separate universes.

Martín Freire conceived the creation in a broad, but limited sense.  It is broad in the sense that it would not be right to confine it to a specific discipline; limited if we think of the close, sometimes literal relationship that is produced between his two-dimensional and installation works. The illusions to childhood through the symbol of the toy are constant, although conceived not only in the sense of fun and spontaneity, but in order to build a critical, reflexive apparatus around our society. The relationships that are established between base and form propose disturbing readings of some of the works that intentionally play with the disconcerting ambiguity that these familiar objects induce in us; out of context and transformed in scale, they deliberately invade our space. A toy transformed into art object, art object transformed into toy, the game as elusive response to reality.