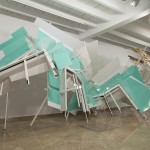 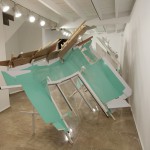 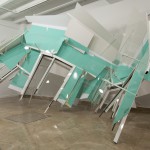 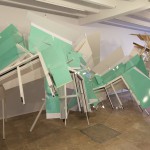 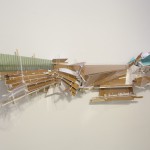 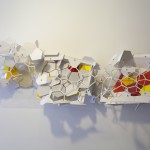 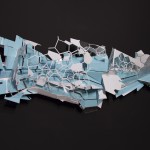 Martín Freire, Seville, 1975, winner of the competition for the development of a site-specific installation at the Nienver Shopping Center in Seville with his Windows Cut project, the exhibit will be a continuation of the investigations posed by the artist in the last year. In 2013 Alarcón Criado will present Freire’s work as their featured artist exhibition proposal at ARCO Madrid.

The title of the exhibit, “The Triumph of Time and Deception,” alludes to George Friedrich Handel’s opera, a moral fable about the transience of beauty and worldly pleasures. Handel’s work, involving four characters – Beauty, Pleasure, Deceit, and Time – is an allegory about the farce of illusion and the hypnotism that pleasures stir up in man, who squanders his youth in vice and excess. Merciless Time, that will bring deterioration and aging, will harshly judge the banal lives of the characters in parties and pleasures and will ultimately lead them to death.

Martín Freire is interested in the idea of transience that has been a constant in his work. His art assumes that the ephemerality continues to be one of humanity’s principal concerns and this justifies important formal consequences in his work.

The exhibit will be composed of various three-dimensional pieces, above all a monumental installation that will star in the gallery. The piece is formed by angled planes of aluminum windows joined by opaque polychrome PVC masses. The windows, highly symbolic for Martín Friere, appear in the artist’s previous work, such as 05.INTERIOR.DOM.MOLINA.DIA, 2011, belonging to the DKV Collection and recently shown in the BB AA Madrid Circle and in the Club Exhibition in Seville and Windows Cut, 2012, the aforementioned work that won the project competition organized by Neinver and the management company Urroz Projects.

For Martín Freire the window is at the same time a metaphor and a symbol. Through the window we see life pass by, we can peer out, look without being seen. The window is an opening in the wall, a threshold that connects the interior and the exterior, in sum a symbol of transience.

In his work Freire places the window in the category of sculpture, but this is not only a constructive pretext. Rather, the window transmits a symbolic force related to the expiration of life and an invitation to the aesthetic projection of the gaze, and is at the same time an evident reference to the ephemeral character of the artist’s work.

Martín Freire poses his work in a limited position with respect to artistic disciplines. Trained in Fine Arts at the University of Seville, where he completed a major in sculpture, his work derived from a revision of traditional mediums and their uses in painting and sculpture from the start, resulting in installation projects, such as those that we can see in his project in the gallery. Martín Freire’s sculpture implies a break with the discipline through the use of industrial materials that give his installations a formally ephemeral quality, cold and utilitarian.

His collaborations in the field of cinema, as the art director of several films, have inspired his work with a language related to staging and theatrical props, applying this experience to the field of the arts. In this way he has refined his resources to dispense with traditional artistic materials, playing with the ephemeral, scale, and appearance. There are recurring motifs in his iconography, in which he mixes publicity, design, and twentieth century artistic resonances. In his most recent projects the artist presents a boundary between painting and sculpture, represented by architectonic motifs, often figurative and others mimetic, represented through the mode of runaway perspective and simultaneous points of view, generating a complex spatiality. Industrial material such as PVC, acrylic, or vinyl are employed to express a restrained and distorted view of the way we perceive our everyday environment.

The relationships between reality and representation characterize one of his principal concerns: distorting the reality in which his works are inspired, he proposes an distorted reflection of how to diminish the importance of comprehending our surroundings, highlighting the contradictions that we cement as contemporary emblems of certainty.