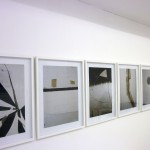 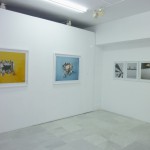 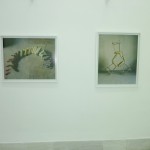 This exhibition is a testament to the artistic analysis and thematic evolution which over recent
years has characterised the trajectory of the artist. Graduating from the Rhode Island School of
Design (USA), specialising in painting, his work is now articulated by means of photography – not
photography as usually discussed and as traditionally understood as a means to document and
record, but photography in relation to other media such as painting or sculpture. In doing so, he
is integrating and thereby melting different synthesised procedures, which gives his
photographs a conclusive character; creating images that are not limited to documentation, but
take into account the relationship between colour and the balance of composition; space and
everyday objects that make up our world and which effect you. Essentially, Laviada builds and
deconstructs space.
The three series of work which feature in the exhibition show the concept of transience in
relation to objects in time and space, and the will of the artist to make a record of them.
The first series, Photo Sculptures, won the ‘Discovery Award’, PhotoEspaña, in 2009, giving the
artist the opportunity this year to produce a solo exhibition at the same Madrid festival (June 9),
which is to be held simultaneously with the gallery exhibition (July 25).
In Photo Sculptures, everyday objects become protagonists and rise to artistic material use: the
artist starts to gather items found in areas of decline, as in the restructuring of Mexico City, and
gives them a sculptural appearance. The artist wants to give these objects a special aura and
change the common idea that people have of them, trying to give them a different meaning. It
could be linked to, Arte Povera, which notoriously resorted to using poor materials such as
wood, rags, plastic, industrial waste, etc., and often they were assembled by creating their
environment-related facilities. Thus, the artist photographs immortalisations through the
medium, creating new images. His declared role model is the American painter who worked in
the sixties, Robert Smithson, known for his ‘Earthworks’. Like him, the artist reflects on the
subjects of modernisation and globalisation and the surrounding consequences. Everything,
even architecture, is temporary and disposable. Therefore, photographed by Laviada, objects
constitute a real urban archeology that reveals part of the story or the functions of the
photographed sites and documents the transience of time – not just life in general, but also of
the work of art, of ideas, thought or aesthetics. The photos in this series are also called,
“Ephemeral Sculpture”, (such as Smithson ), for their temporary character, and it is thanks to the
photography of Laviada, they are captured forever.
De-Constructions, shows a series of holes made by Laviada in the walls of the abandoned
buildings and rotting historic centre of Mexico City; placed next to renewal, in order to highlight
and transmit the posterity of the life cycle of urban spaces, which otherwise would be forgotten.
The central idea behind this series is to destroy something in order to create something else – in
this case, images. Through photographs taken at a close distance, the artist is able to connect
with the viewer through the images, allowing us to observe the colour contrast defined between
the colour of the wall and tear, and also the colour clearly dissonant at the back of the room. In
fact, the use of colour plays a key role in his work, precisely because of the relationship that the
artist wanted to create with paint and give his work an obvious abstraction.
In conclusion, the most recent work of the Mexican artist, presents: Broken, an abstract language
which reaches its apex. The photographs show broken windows as fragments, and where the
contrast between black and white and the absolute synthesise, it recalls Suprematism through
the abstract art which it expresses – the essence of art itself through a surface. This is one series
in which the intervention of the artist on the subject is more limited, adhering to the frame and
light treatment. The action was decisive in the previous series, therefore, it takes Broken a
minimum level of intervention. Despite being the most photographic series, it is by far the
closest to a pictorial approach, in addition to issues related to nature and ‘postpictoric’ – Minimal
Abstraction – among other movements.